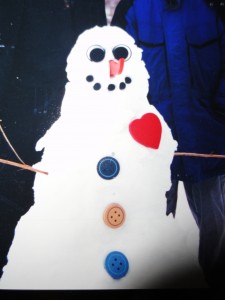 Yesterday morning I knew Fast Eddy would be delighted to see the snow that had fallen overnight. It wasn’t much, but I knew he could find fun in it. Since his double knee surgery last Spring, he is back to doing his famous 180 degree mid air turn arounds. Upon seeing, feeling, and of course, tasting the snow, that is what he did when he greeted the morning. He became a pup again with the playful attitude of fully engaging himself in the first signs of winter.  I have to be careful walking him in snowy conditions due to his exuberance which can be tricky. It would be better if I could drag an anchor behind to hold him back. He can’t wait to get down the street. Sniffing the ground as he lopes along and catching a lick here and there. Last year, he had several favorite winter walk activities, one was walk on the high mound of snow between the sidewalk and the street as if he was thinking “I am King of  Mountain”. Then if we walked in the road, he liked to propel himself through the snow sideways nose first, like a little otter. At moments like that I am always glad I can provide some fun, for his pretty much, indoor life. He actually has noticed the  Christmas decorations that have popped up throughout the neighborhood , especially the lit up deer. He gave them more than a second look the first  night that we saw them. He has also noticed the few miniature snowmen made by the kids on the block. He approached one in a  front yard very cautiously wondering what kind of  strange animal it was and likely wondering if it was frozen with fear upon his approach.

I remember from my years of teaching, that at the first heavy snowfall, kids would run to the windows in excitement. 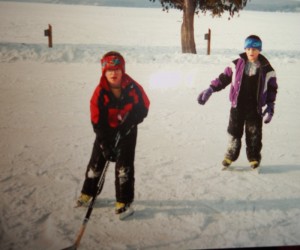 Forget about trying to hold them back. They would hardly contain themselves until recess. The playground by the end of the day would be a field of  giant snowballs, taller than the biggest kid. Since the ground was not fully frozen, bits of dirt, wood chips, grass, and sticks coated  the other than pure white surface.  Some children busied themselves rolling smaller balls of snow and stacking them into walls for a fort. Of course if there was one fort, there had to be at least another. I believe it is called the Law of Snow forts. Kids, like dogs, love eating snow. Their little minds  have not heard about acid rain and pollution that might have contaminated the white fluff. They only think it is manna from Heaven and can be devoured. And of course the little people always like making heralds of angels in the snow by swishing their  arms and legs back and forth. It is all winter joy and fun. 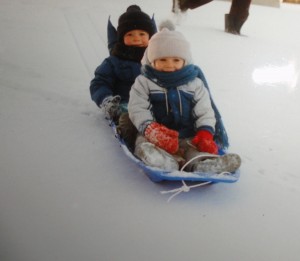 With my own boys, we had great fun sliding on the hills on the farm and later at the golf course. They quickly gravitated to skating and ice hockey at the local outdoor rink. My dad and brother cleared the snow on the pond at Pinecroft a couple of different winters and the whole family skated there. I believe that was the last time I played “Crack the Whip” because I fell backwards and cracked my head. I can still feel how much it hurt, it was at that point I realized my vulnerability as a mid-life adult. And besides, my feet never fit in my ice skates like they did when I was a kid, as a grown-up it became a painful experience. By third and fourth grades, Garrett and Aaron began participating in Ski School at Crystal Mountain and then found their own fun skiing and snowboarding. It was difficult to let them grow up and go on their own up the chair lift and pursue their own challenges while there. My eldest son, became fascinated with snowmobiles, but quickly found them to be expensive fun and expensive to maintain.

As for me,I remember while I was a kid growing up at ThornHill that winter presented its own unique fun. We had a 1/2 mile long south driveway. In the 50’s and early 60’s my Dad or our foreman would plow the drive with a tractor and plow. Now the fun would begin when my brother and I got to be pulled on sleds and our skis behind the tractor.  The skills of  basic skiing were learned in the  orchard. One Christmas, my brother and I received skis, the kind you put on regular boots. We would ski out to the orchard and herringbone up the hill then ski down over the terraces. The terraces provided nice little jumps as we sailed down the hill. That was not usually enough for my thrill seeking brother, he often built at least one terrace up so that we would get lots of air as we flew over it.  Another favorite activity was building snow tunnels. The snow in good winters was piled up 8 to 12 feet high around the edge of our yard.  My brother and I would dig tunnels along the ridge. The tunnels would provide a warm respite from the biting winds. One winter, we did  not have lots of snow, so my Dad helped us build a skating rink in our front yard. I remember it was a bit uneven, but none the less it was fun to have. Nights that he was not sprinkling it with icy water we could skate on the rink illuminated by the yard lights.  AND one of my best winter memories, was going out af 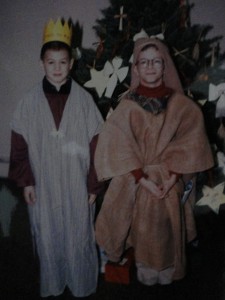 ter dark, bundled to the point that no cold could reach my body, and lay in the snow and look up at the clear night sky and listen to the silence. I often felt I just go to sleep and never be so happy as that moment.  Ah! The beauty of the winter night sky, most incredible .

More than just all the fun things that can be done in winter, as opposed to different seasons, the first snow brings the thrill and excitement of Christmas being just around the corner. With the craziness of crowded shopping and chaotic schedules that the season brings, my husband I agreed it is refreshing to have Advent begin and recharge with mid-week services. I taught the meaning of Advent and the Advent wreath to 4-6 year olds last Sunday. It was a good refresher for me, as well. I hope you and your family are able to experience the “coming” of Christ’s birth this holiday while you celebrate the season. God’s peace and Slainte’!