The Pink Brick House on the Hill 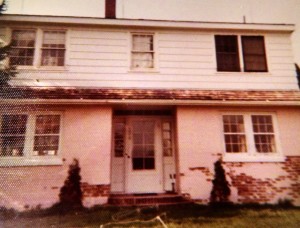 I vividly remember my Grandma and Grandpa Stone’s pink brick home on Eden Hill. Their home was perched atop a hill, overlooking their sweet cherry orchard, with a near panoramic view that opened to the west and the north 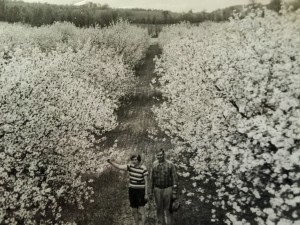 During my early years, I knew these Grandparents the least, because of their annual departure south to Bradenton, Florida. But what I DID know, was because of my Grandmother’s  letters.  She was a devoted letter writer to her sons and wrote weekly, telling about the weather, their neighbors in the park and the family and friends who came down for a visit. It must have kept her busy. Her letters were two to three pages of  weekly news. 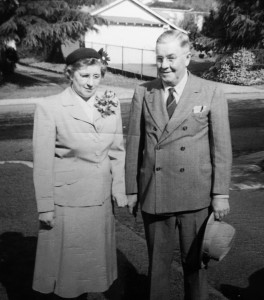 n from Florida was always a special occasion. One particular year, I remember my older cousin Midge and I each received identical summer dresses.  On another return trip, my Grandma brought  orange perfume for the two of us and some jewelry. I was beginning to like this annual event. These early memories are within a short span of time; less than 10 years.

My Grandpa Stone loved baseball. Lucky for him, one of his favorite teams had Spring Training near him in Florida.  Once he was home, up north, he spent his days listening to the Tigers and of course his beloved Chicago Cubs on the radio. While keeping up on baseball and his sons,  I remember seeing him dozing in his black Chrysler Imperial,with electric windows, in the shade of the woods at the edge of the orchard. I could hear the announcer of the ball game softly droning in background. He typically wore khaki pants and shirts, topped off with a pith helmet (popular Florida wear) or a straw hat. And of course there was the ever present sweet smell of a slow burning cigar, wafting about him in the breeze. 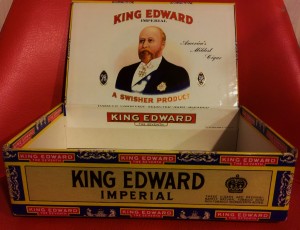 A family visit would find the adults talking while  my brother and I amused ourselves with ancient toys like rubber band wound spool cars, kept in a cigar box that my father claimed to have played with, when HE was a boy. If it was a pleasant day, you would find us outside on the immediate hilly area in the front yard which was often stuck with wickets and posts for croquet.  Chinese checkers were also a fun way to pass the time, as well as monkeying around with the piano in the corner, which was quietly collecting dust. The piano bench, held its own wonders,  a great pile of fascinating, colorful sheet music from an era long past. A typical Saturday afternoon, you would hear the Lyric Opera out of Chicago playing on the living room radio competing with a  baseball game from my Grandfather’s office as he sat in his office chair in front of his great roll top desk.

They, like many of the snow birds from the north, lived in trailer parks that were quickly popping up with the influx of people fleeing  the snow and cold weather that they had gr 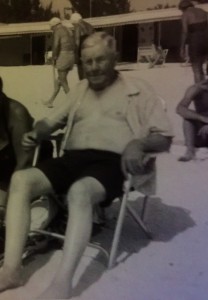 own tired of with age. They easily formed bonds with neighbors who became like family. This was 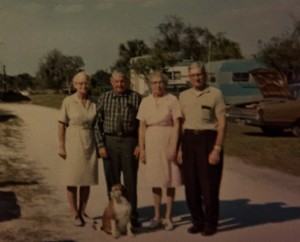 how they passed many years, from September until May. It was their home, away from home. My grandmother occasionally included pictures of them with friends and relatives at the beach, fishing, or lounging in the warm sun, outside of their trailer.

Then, my Grandfather’s health began to fail in his late 60’s and by the age of 74, he died. My Grandmother’s life changed, trips to Florida abruptly stopped. She would then outlive her spouse by 14 years, and  would spend the remaining  part of her life in the North near her sons.

Now and then, I would spend a night or two with my Grandma in the pink brick Eden Hill house. I loved staying in the knotty pine bedroom upstairs with the two  built in beds. The stair steps and the upstairs hardwood floor boards creaked  as I ventured down the hall to my favorite room. There was a comforting ancient smell about the upstairs. I  loved looking at the old books on the shelves and snooping inside the cupboards, closets, and drawers to see what they held.

There was an especially charming feature at the top of the stairs beneath a window; a built in bed. This likely was an after thought for a need for an additional bed. It was framed in between two cupboards with a custom, child-size mattress, tucked in conveniently just off my Grandparents’ bedroom. I slept in it until I was finally too tall to fit there anymore.  Unknown to me at the time, if I looked out the window along side the bed, I had one of the best views in the neighborhood of the  Manitou Islands, Empire Bluffs, and Lake Michigan to the north.

Downstairs, the living room  featured a fire place protected by a black screen with an  iridescent, turquoise peacock.  Candy dishes filled with butterscotch hard candy, butter mints, and peppermints were placed conveniently on end tables throughout the room. This L-shaped room ended with a small dining area scenically banked with windows looking north. A china cabinet completed the room and displayed  a collection of  tea sets and painted porcelain plates that were handed down to my Grandmother from her mother. She had four sisters, I imagine each  girl received some lovely Bavarian pieces to treasure. 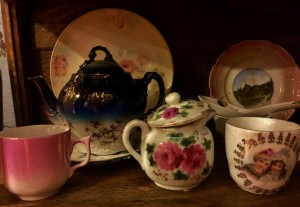 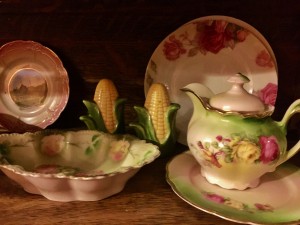 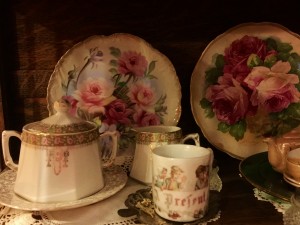 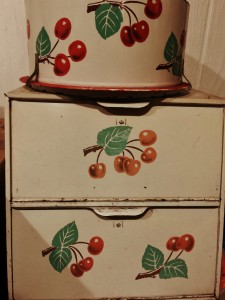 The tiny kitchen had a red linoleum counter that stretched out into the middle of the room to make a breakfast and lunch eating area. Ice cream parlor chairs provided seating . The counter displayed a bread and cake tin, both decorated with cherries and a collection of canisters of green glass with matching salt, pepper and flour shakers

. The kitchen was anchored with a long white cast iron sink tucked in the corner.

If you exited the kitchen to the east yard, you were surrounded by a dense border of lilacs and an apricot tree. On the west side of the house Butternut trees edged the yard.  A thick green and white ground cover  shirted the entire front of the pink brick exterior.

The  gateway to this  special memory was the front door which was flanked with side windows and a door bell with a lovely chime. Ringing the door bell and entering through the doorway guaranteed a good meal, followed by a delicious seasonal dessert, and the summer months to reconnect again after a long winter’s absence. 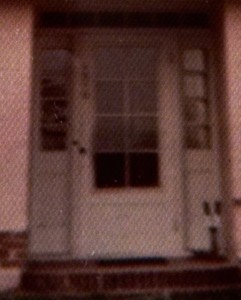