“Judge not lest ye be judged…” 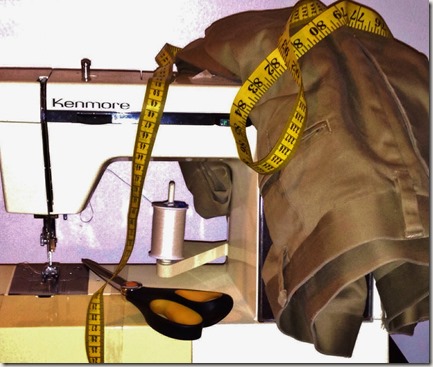 A week ago, my husband Jon let me know that a pair of his pants needed the clip at the top repaired, as the cloth under the hook had begun to rip away. The pants could be mended, but not by me, nor my mom (she lived too far away), so I took the project to a shop, which I have noticed in passing. It said “Louis Tailoring”. As I entered the shop, there was no main counter, but racks of clothing like you would see in a dry cleaners, waiting to be picked up.  I heard a voice say “hello”, I followed the sound deeper into the shop, where a counter appeared opposite a small room with a sewing machine. The woman, a petite gal of Asian decent, sharply asked me what I needed. I apologetically showed her the pants and asked if she could fix them. She made a disgruntled face and took them to the counter and quickly wrote out my name and phone number and handed me one copy and said “Wednesday”. Then she returned to the room where she had been working. I felt a bit scared by her shortness and quickly left the shop.

Yesterday I returned to pick up the pants, hoping she wouldn’t charge me more than the pants had originally cost. My whole reason for bringing them to her, was to make them wear longer and not just toss them into the rag bin. Again, as I entered the shop, I hear the same “hello?”. I walked toward her voice and say I am here to pick up the pants I left last week. She entered the hall and asked for the receipt I had been given. I apologize that I didn’t think to bring it with me. She sighed! She wanted to know what my name was and what the pants looked like as we searched through the racks in the front of the shop. She didn’t find them, I was a bit nervous by then, already I had not followed the standard procedure of bearing a receipt, but she went back into the room she had been working and found the pants in a “to do” pile. They were not done. I emitted a small moan. She quickly said, I can do it right now, have a seat. That was easy, there was only one chair. I sank down into its cushion and started to take in my surroundings. Above the counter was a small cork bulletin board with a collage of pictures from over the years: weddings, family gatherings, children, and a few pictures taken in a church. I began to wonder if she was Korean or Hmong because was streaming a talk show in an unfamiliar language. I could hear her working: the clipping of her scissors, the whirring of the sewing machine, and the occasional hiss of a steam iron. I wanted to step over to the edge of the doorway and watch, but was afraid that I would be sharply told to return to my chair.

While I waited, another customer came into the shop, a young twenty something girl, who seemed familiar to the woman. She had a laundry sack full of pants that needed hemming. Some were new, with the tags still on them, others were not. She talked fast. The clothes were her mom’s and her mom had just lost a lot of weight and needed the pants hemmed and unfortunately they have lots of dogs and cats, hence the animal hair. The owner of the shop, laughed with the girl, and quickly counted out the items and made out a receipt for her. I was thinking, this girl would probably remember to bring it back with her. The girl rambled on about the tenants from above the shop who had a big scary dog out in the parking lot, and she thought it would eat her if it got loose. So the owner laughed some more and walked her out the back door of the shop, as her protector. When she returned, she chuckled  warmly and said that girl has some ADD issues and that she talks too fast. She then surprised me with an apology for not giving me a magazine or something to read while I waited. I mumbled I left my phone in the car, so I was just meditating (using the words loosely). She said “OH! You Christian?” I told her I was, she said “Me, too, 37 years”. She then said the Asian program that was streaming from her computer, was a Christian program. It was then only a few more minutes and she returned to the counter with the pants. She wrote out another receipt and told me it would be $8, which I was glad to hear. I paid and stuffed the receipt into my pocket and thanked her. She smiled and sent me on my way. I bravely asked her if I ,too, could go out through the back door as the young woman had done earlier. You see, there was a sign in bold letters on the rear door that said, EMPLOYEES ONLY, she said “yes, that would be fine”, in a friendly voice.

As I walked to my car from the back door of the shop, I let out a breath of relief, this woman who I felt, previously, had an intimidating manner, really was very friendly and nice. My earlier judgment was quite far off and hopefully she wasn’t judging me as a bumbling idiot who had forgotten my receipt and couldn’t manage a simple mending project.

RSS feed for this post (comments) · TrackBack URI
Previous Post
« WANTED: A LAWN BOY WHO CAN DO EVERYTHING
Next Post
The Pink Brick House on the Hill »
janeofwisconsin.com blog
Bombax Theme designed by itx
Content Protected Using Blog Protector By: PcDrome.