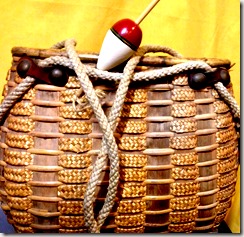 What did kids do during their free time in the 1950’s? There were no video games, or hundreds of channels on TV if you had one, nor computers. Kids had to create their own entertainment with the blessing of parents who weren’t worried that someone would snatch them up if they were out of sight.

For my brother and me,the destination was Wallaker Creek which was  just a half mile due north from the farm. It became the great escape to adventure. Once we had bikes we could take a spin to the creek to fish very quickly. Before we had bikes, we walked down the road. During times like that stories were spun, by my brother, to fill the time and I knew no different. But one time I remember we walked through the neighbor’s cornfield. I vividly remember the first time I  saw these odd little brown dried ball-like things on the ground in the cornfield. My brother very wisely told me that farmer put them there so if a deer stepped on one, the dust would spray up into their eyes and  blind them. I did not question his wisdom, THEN.  Eventually I would find out they were a form of fungi, called puff balls and when stepped on they sprayed out their dusty spoors, harmless, and certainly NOT blinding nor a deer repellant.

Living far from a lake, hanging  out in the shade by the creek was the next best thing on a hot summer day. The creek was barely noticeable to cars on the rarely traveled graveled road. The eastside of the creek was  a fenced  meadow sprinkled with birch and willows: where cows once grazed and were able to access the water for  a cool drink. We rarely fished on that side, because we figured it was private property.  On “our side”, state land,  we had to climb down  a steep embankment to reach the water.  A culvert, filled with spider webs  tunneled the gentle creek  under the road. The flow of the water created a deep pool for fishing. We always started  there first, if we had no nibbles, then we would venture down the creek  along each side. The water was generally knee deep and had a sandy bottom with veins of black. The further west we wandered the 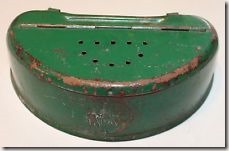 more trees we had to get around and the higher the ferns and the thorns.  We would let our lines drift with the current where it cut under the banks. Experience had shown us that fish like to hide under there. We would occasionally catch a small brook or speckled trout. That occasional catch is what kept us going for the next “bigger one”.  My brother usually carried the bait; before a fishing outing we would dig  holes in the yard for earthworms and fill up a pie-shaped worm container that attached to my brother’s belt. 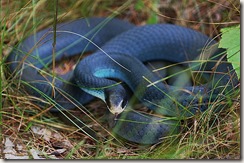 One day at the creek we were startled by a snake: a giant blue racer that slithered quickly down the bank. It was this kind of side thrill of fishing that  made it fun, even if you didn’t get a whole creel of fish. You had a story to tell about a giant snake.Most often my brother and I fished alone, but I remember one opening  day of trout season, when our Dad took us out. A friend of ours told him there were fish in Dair Creek just down the road past our regular haunt. He also told us  night-crawlers would increase our chances of catching our limit. So we went out the night before opening day with flashlights and shovels to a woodsy spot to surprise and collect our bait.  Now,we were perfectly ready. The next morning we got up while it was still dark and drove down to the railroad tracks and parked. Then hiked a quarter of a mile down the tracks to the creek .  It was a very steep bank down to the creek and loaded with thick underbrush on both sides. It was difficult to maneuver down stream.  It wasn’t as friendly as our beloved Wallaker Creek.  All in all, it was a fun adventure with our dad,  I don’t remember bringing home fish and the adventure likely only lasted a couple of hours.In looking back, it was not how many fish we caught, or if we caught any, as a measure of the experience, but the company we kept and the memories we made.