Growing Up with an Older Brother in Northern Michigan 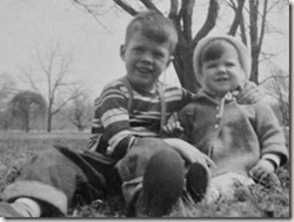 Growing up in NW rural Michigan surroundings, what could be better than having an older brother to “hang with”? Life was exciting and fun, with him taking the lead and setting the course.

We built tree houses together. At one time, we had two tree houses and used orange juice cans & string telephones to talk. When we walked in the woods, every mound was a potential Indian burial mound that could hold fascinating treasures. We dug up the woods here and there, with no luck.  I remember when he discovered Morse Code, we practiced at night sending messages by tapping on our joint wall between our bedrooms with codebooks and flashlights in hand. We spent lots of time at the creek down the road fishing and playing throughout the summer. Our Dad  spent the first morning of trout season taking us out at the break of day. One place I remember was farther down the road to a spot where we had to walk down railroad tracks to get to a creek that a local fisherman said we would get Brookies.

We had roller skates that had a key that you would use to tighter the vise like grips that attached to your shoes, and then we would skate in our apple packing shed which had a concrete floor. He also had both a Daisy bb gun and bow and arrow set which he received on various birthdays. I won’t go into the dark stories of a jealous little sister and those 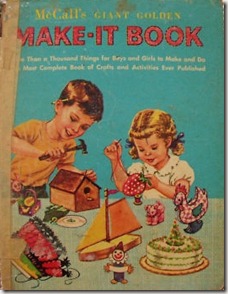 weapons, I will let you leave it to your imagination. But we did have some adventures wading through the tall pine trees that lined our mile long driveway, hunting for partridge. When one was spotted it was such a surprise that we often scared them off.

This book provided a lot of inspiration for things to do. The pictures captivated our interest and we had access to a shop with lots of tools and parents who encouraged the activities. I fondly recall the stilts that were made. It was fun to learn how to balance on them and walk on our sidewalk. I think the orange juice can & string telephone idea came from this book,too.

We made and flew kites in the spring, played flies and grounders and basketball in the summer, and in the winter skied down the terraces in the apple orchard and made snow forts in the huge snow banks in the driveway. 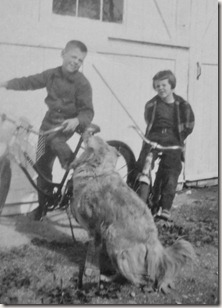 We both received our first two wheelers at the same time. They were our mode of transportation to go fishing and exploring. About that same time he was playing Little League baseball. He was allowed to bike into the nearest town, 4 miles away, with our neighbor to an afternoon game. I begged to go with them. I was told no, but rode a little ways , then one thing led to another and pretty soon I had ridden all by myself into town. I biked near the game, but did not want to be seen, and finally decided I had better head back before I was caught. Well, heading back, they caught up with me and my parents were told. There were consequences, no “Shaggy Dog” movie that night at the theater. I sobbed. Life was not fair in a younger sister’s mind.

When he was a teenager, he built a Huck Finn-like log raft from trees he cut down to float around on a beaver pond on our property. He and his friends camped out there and fished from the raft, until the pond was blown apart by the DNR.

Our farm foreman, was a mechanical genius, and he mentored my brother, and likely my father too, in keeping tractors, trucks, and cherry pickers running. That was where I drew the line, I had no mechanical interest, so I passively observed and monitored what they 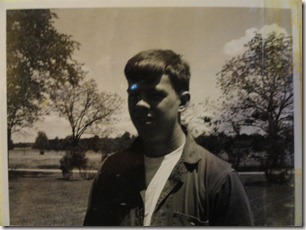 In his youth, he seemed to enjoy satire and gravitated from comic books to Mad Magazine. He had “cool” friends who I secretly found fascinating. Oh yes, he was a Bob Dylan devotee,too, which in the late 60’s was a cutting edge to me,  it was the Vietnam War era and everyone was questioning the government, social values, and religion.

As a younger siblings, I continually struggled with the words, “you have to wait until you are older”, from my parents. It was really hard at the point when he became a teenager and no longer wanted to play or be seen with me. But he set the course for my life, whether he knew it or not. He was adventuresome and thought outside the box. I remember when he came home from MI Tech one summer  and said he wanted to take a “quick trip” to Alaska with his college buddy, just for the adventure. I was shocked my parents allowed him to do this, plus take our new Fastback Mustang. I realized then that my parents’ boundaries for us were not defined in rock and they were supportive, within reason, of many of our desires and ideas.

Later in life, as technology evolved, we found a common new interest. He taught himself web design using code and other business software.  We continue to enjoy all that technology offers, including smart phones and cameras.

When we owned our farm market he and my Dad added many innovations that made it a year around business. He explored maple syrup production and ways to minimize collection. After many years in business with my dad who was nearing retirement, my brother decided he would not continue farming fruit. It is a life of risks and a turning economy. Instead he built two successful golf courses out of beautiful tracts of land we owned. In trying to find use for one of the courses and the woods surrounding it, he and his grown up children turned one of our golf courses into a winter Nordic Center for a couple of years.

Throughout his adult years he has been quietly compassionate as an individual, an employer, and as a family member.  I have seen him bend over backwards to help those 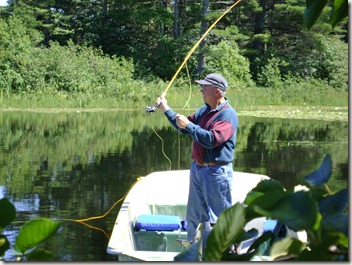 workers who had troubled pasts and legal issues or heath problems. As an example while in college, he married his high school love and both he and his wife became guardians for his wife’s two younger siblings. An instant family makes one grow up pretty fast. I cannot imagine during my college years being able to step up to do something quite so impressive. A decade later he would begin his own family and be a great father.

As our dad aged, my brother slowly became the lead dog in the family business. I often, in fun, have called him “the King” of the family. He is  wise, yet humble and generous, a good guy to go to, for advice. He is respected in the community as a businessman. He has led his life well, with much accomplishment. Under a somewhat serious exterior is a sensitive individual that I am proud to call, my brother. Happy Birthday, Lee!