We were in Iron River last weekend and I 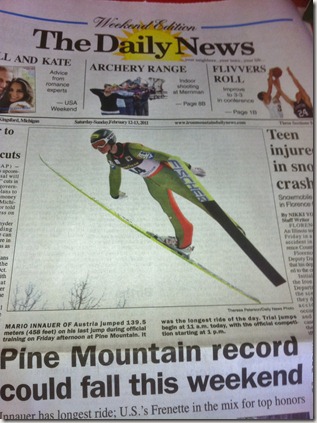 happened to see this newspaper in a gas station. Seeing these headlines reminded me of a couple visits I have had to Pine Mountain. No, I was not there ski jumping. My husband Jon took me there in the early days of our relationship to show me the incredible view and to see the 2nd highest ski jump in the Upper Peninsula.

The ski jump was near the top of the list of things I wanted to see and perhaps seeing a bear again was on the list, too. Who would have thought I would see both at sunset, on top of Pine Mountain. I am not sure how Jon arranged that.

Nine months later on a bitterly, cold and gusty day, he took me back, on an anniversary of our first meeting. I found it odd, that we were back there, but didn’t ask questions. We needed to hang on to each other or be blown off the mountain as we exited the car.

We walked out on the judging ramp which extends many feet out over the mountain slope. Then he starts telling me how much he loves me. I am thinking why couldn’t he do this in the car where it was nice and warm. His spiel continues for about a minute which seemed like eternity as I slowly begin to numb from the cold. I am trying to shield myself from the icy wind with his body. The next thing I know he is down on his knee. I am thinking, oh my, something is wrong! Was he dying from the cold? He then plucks a tiny box out of his pocket into my hand. Oh my gosh! It then dawned on me what he was doing. But I quickly thought, don’t take the ring out of the box, it will get caught up in the wind and go, who knows where, below us. So I quickly stuffed the box in my pocket as he began to ask me to marry him. I was not surprised he would ask this, but today, on Pine Mountain it caught me off guard. Then he officially spoke the words, I was stunned and I kept saying “OMG”.  Then he repeated the question again with a worried look on his face. In the midst of the emotion of the request, I had forgotten to answer his question. He was relieved that was the only reason it took me so long to answer him. I then said, “We have 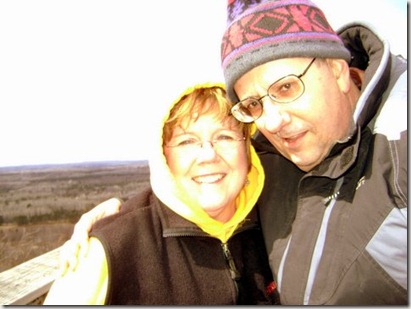 to record this moment!” We always have cameras in our pockets (Dueling Cameras R Us). We decided it was too windy to do a timed shot, we would likely lose the camera over the railing. So we clutched and Jon stretched out his arm and snapped one picture quickly, hoping it turned out, because it was too cold for a 2nd shot .

We then practically ran back to the shelter of the car. We started talking madly, then I realized I had not even looked to see what was in the box. I whipped it out of my pocket and ripped it opened. I was shocked to see a heart shaped garnet ring. My favorite color, red, and a heart to symbolize the moment. He read me correctly, it was perfect.

We then went into Iron Mountain and had an early dinner before heading back to Appleton. I was still reeling in shock and awe while he gloated with pride at his romantic success. I don’t believe he ever wiped that smile off his face during our 3 hour ride. Well, all I can say is, I was impressed, flattered, and deeply moved at the extent he went to carry out that moment. I didn’t ever think that love would happen again, but it did.

So on this 3rd anniversary together, I thought I would re-live it as a surprise for him. Happy Valentine’s Day and Birthday, Jon.