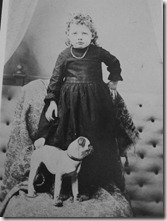 My grandma spent a lot of her youth living with  grandparents while her mother did laundry in the lumber camps around Honor in the NW Lower Peninsula of Michigan. She attended a one room country school through 8th grade, the Buchan School, only a stones throw from both sets of her grandparents’ houses.

She met and married my grandfather when she 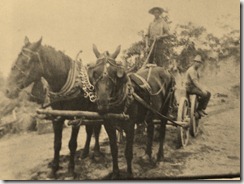 was 16 and he was 21. He too, worked in the lumber camps, as a teamster,one who hauls the logs out with horses and sleigh or Big Wheels. They were married 10 years before they eventually added to their family, 3 sons and 3 daughters. After 15 years of marriage, they moved to the Warren farm, high above Crystal Lake. My grandfather ran the farm for the Warrens, and my Grandmother did their laundry and added to their income by cleaning cottages on Crystal Lake. 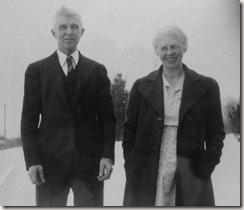 As their sons became of age, it was decided that two of them would collectively farm with their father, just south of Herring Lake. My grandparents moved to the large Bovard House. It was a huge house in my eyes, with 5 or 6 bedrooms upstairs and a secret little room under the stairs. There was always plenty of room for overnight guests and the entire family on holidays. Eventually they would move down the hill into a smaller house across from their youngest son.

When my father was busy at Thorn Hill in the Fall and Spring, I, a pre-schooler, was dropped off at my grandparents while my mom taught Home Economics in Arcadia.  During those years I witnessed basic farm living, that was interesting and yet different from my experiences.

My grandma made her own soap from lye. It had a very distinct good smell. When a friend visited me this Fall, she brought some of HER homemade soap as a gift. And even thought my friend’s soap is scented, it had that homemade soap smell that I remember from my grandmother’s efforts, providing an instant flash back.

I also remember my grandfather killing chickens. When a chicken’s life had reached a point of maturity, usually before winter, it became a potential roasting hen, and then met its demise. It was shocking that their life came to an end by the wringing of their necks. UGH! After they were cleaned, my grandmother would scald the birds in huge boiling pots of water, which made the plucking of their feathers easier. I even helped a little with the plucking. But that experience had its own distinct smell and it was not one of my favorites.

Grandma’s kitchen often smelled of fresh baked bread. I learned to knead bread under her tutelage. When I was preschooler, she would bake bread on a wood stove later on an electric stove. Another one of her favorite baked goods, were old fashioned sugar cookies. Her cookie crock was always full and it was one of the first things family members went to,  when visiting her. The cookies were best dunked in tea or coffee, or in my case, hot chocolate.

Two of my uncles ate lunch with my grandparents everyday because their wives were off teaching school. My Grandma provided a good hearty lunch for them. So it was lunch for five, made up of soup, fresh bread with butter and honey, and some of her canned fruit. Applesauce was often served. As she noted, an apple a day kept the doctor away. It must have, in her case.

After lunch, there was a routine of nap time for all. We would all go into the living room, and my uncles would each take a lazy boy or couch, and so would my grandparents, and everyone would take a little siesta. I was expected to nap as well. That part of routine was not always accepted very well by me. I can remember my Grandfather getting after me for not following my grandmother’s orders. I had a pretty good stubborn streak and a lip that could maintain a pretty stiff pout. But I was afraid of my grandfather, if he raised his voice, I relented and obeyed, usually with tears.

My grandmother kept me busy by making homemade salt dough, a precursor to Play Dough. It was fun, I rolled it and used cookie cutters on it, and even went so far as to taste it, not so good. I watched her spent winter months cutting old, worn out clothing, into narrow strips. Then she would sew the strips together end to end, using her treadle sewing machine. After this was done she would wind the strips into softball size balls, that would be later used for weaving. I helped her wind the strips. She had two single harness looms in her basement, in which rag rugs were always in progress. She made rugs for her church to sell at rummage sales. She made rugs for all of the family. I still have some. I have one of the looms here in Wisconsin. As soon as my basement is finished and set up, my plans are to contact some people I met at Appleton Farm Mkt. to help guide me through the warping and set up of the loom and carry on the primitive art form.

Even thought grandma only had an 8th grade education, she went on to self educate herself throughout her long life. She read her Bible faithfully. One aunt noted her interest in reading, and annually gave her a subscription to a national newspaper. She belonged to the Reader’s Digest Book Club, and you could always find The Saturday Evening Post and Farm Journals on her coffee table. When she could no longer see to read, she used the “Talking Book” system through the  State Library.

Spending a night with my grandma was an incredibly cozy experience, in spite of the fact that she never heated her upstairs. The wood floors were cold to the touch of my bare feet, so I tried to stand only on her rag rugs. Then as quick as I could, I’d jump into bed that would be fitted with soft flannel sheets covered by a down comforter. As I stretched my feet down to the end of the bed, there would be a a large heated flat soapstone, wrapped in newspaper to warm the bed while I drifted off to sleep. My grandma would heat the stone in her stove prior to bedtime. This was indeed a most interesting way to warm the bed. I can still smell that hot newspaper smell in my mind.

She felt it was important to get outside and get some exercise. She walked 3 miles a day, Spring through the Fall and on nice days in the winter, into her 80’s. I remember her taking my cousin and me out through the deep, deep snow to the hill on the back of the farm to slide. Even she would slide. I know I was exhausted as a young child trudging through the snow, I can only imagine how she felt, because she was NOT a spring chicken.

I spent many an afternoon out and about with her visiting some of her friends from church or older relatives she wanted to check on. She would  take some bread, cookies, or something that they might like to read.

I have a couple favorite quotes by her, one was “Don’t worry about housekeeping, it is more important to be outside and enjoying the day and the fresh air.”  Well, she may NOT have worried about her housekeeping, but her home was always clean. The other thing she told me that “ You need to go to church to meet a good man”. She was right.

I have lots of memories of her, a few pictures, a little box of favorite scriptures that she received by donating to Billy Graham, a favorite TV evangelist of hers. She told me we shared something special, we both had Christmas birthdays. Her birthday was the 26th and mine was the 30th. She said it was too bad, all of our special days came at once. And then would laugh. 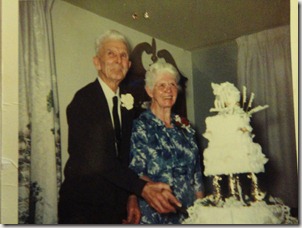 her vision. The changes began by not being able to drive anymore and then not living alone. She did it with some grumbling, but went along with it. She spent her last 4 years in a long-term care facility, which was humbling to such a “once capable” woman. By THAT time she just wanted to get life over with and join her maker in Heaven. She didn’t like all the fuss her family made on her 100th birthday, either.  Her mind was good most of that last year and kept active by daily visits from her children and grandchildren reading to her, singing hymns to her, and telling about their day. She was devoted to her Lord and finally joined him when she was 100 years and 11 months. She lived 22 years beyond her husband and their 62 years of marriage. She was a very remarkable woman and at THIS time of year she is thought of with both a smile and a tear.  Happy Birthday, Grandma.