Christmas at our  Thorn Hill  farm, meant a very fat Scotch pine in the corner of our living room. The tree 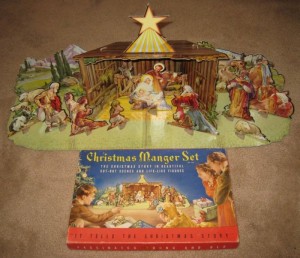 had a string of lights with large, colored bulbs and tin reflectors behind them. I remember that they got very hot and I had to be careful touching them. We had a beautiful angel in a poufy pink, satin dress that sat atop the tree. I had to be scolded to not play with her because she was NOT a doll. Some years we had tinsel, but most years we had spun glass called angel hair to enhance the tree. The angel hair paired with the colored lights gave the tree a wonderful soft glow. Then there was the beloved cardboard Nativity that was placed in a prominent place under the tree so that a yellow bulb could shine down on baby Jesus from a hole behind the star.

Christmas Eve would finally bring the day that I had waited for all year. As a family, we would attend the Candlelight Service at church and all the children would received bags of hard candy, boxes of Lifesavers, or one year I remember we received a special ornament. Upon arriving at home, we quickly got into our pajamas and listened to Christmas Eve TV specials like Perry Como or  Judy Garland special. My dad loved to sing, so music specials were his favorite. 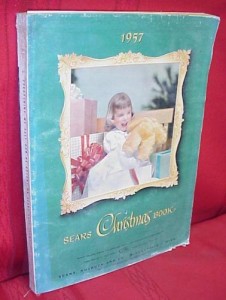 Wards catalogs that came in the mail. I also mentally added things I saw at Oleson’s Grocery Store in Traverse City. They always had many toys displayed across the top of aisles and coolers. I had eyed a special display of dolls that were advertised as having the ability to walk and talk. I made sure that Santa knew and I could hardly go to sleep on the Eve of Christmas.  My older brother woke us up. Upon running downstairs, I saw many new dolls leaning against a pine cupboard near the tree. I was so excited. I ran to each doll and picked them up to see if they could walk and talk, but they couldn’t. Then I  noticed that they looked familiar, these were my old dolls with new clothes. I was told Santa knew my dolls needed new clothes and that was what he brought. Initially, I was disappointed but quickly got over it. I also had a new cupboard for my doll dishes, that I did not see “Santa” making in the Apple Packing Shed nor did I notice my mom sewing the doll clothes.  My parents made Christmas very special with the talents that they had. And oddly enough, THAT is the Christmas that I remember the most. As a small child, I was thankful for what I received. There were never tons of gifts under the tree, but always a couple, something to play with and something to wear.

Later that morning, we would head out across the county for Christmas dinner with the aunts, uncles, cousins, and grandparents on my mom’s side of the family. Sometimes there would be some extra  friends joining us. That would mean there would be around 12-16 adults with a dozen or so cousins. We had to stay inside while the last minute touches to the food were done, then we would eat. There would always be a vast array of meats, delicious breads, relishes,side dishes,and desserts. Adults sat at the beautifully decorated big dining room table and the cousins at several cute card tables staged around the living room. Each aunt brought their particular specialty side dish, my mom’s side was creamed onions. I never realized how good they were until I was an adult. After we ate, the cousins could go outside and slide if there was ample snow. We would eagerly pack ourselves into snow-pants, winter coats, and boots. It was a fun time of getting together with everyone and playing. Then over the years, the cousins became teenagers and did not want to go outside and slide anymore. The girl cousins just wanted to catch up on gossip and listen to music. I don’t remember what boys did, they probably continued to slide.

As we were all farm families, in one way or another, a holiday family gathering was a lot of  work to host, but a great time of reconnecting.