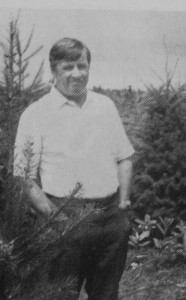 No, this is not  about Christmas. Actually it is about all the work that goes into that little tree that helps make the holiday so bright. My family expanded their fruit growing farm to a Christmas trees farm in the late 50’s. By the early 60’s it was a hot item to sell to extend the short revenue season for crop farming. The market quickly flooded with Christmas Tree growers across the country. Unfortunately, over time, there were too many suppliers for the demand. Thornhill, the farm I grew up on, had an abundant amount land that was not being used for fruit. So the family put in Christmas trees. The majority of the trees were Scotch pine, but eventually there were white and blue spruce and Douglas and Frasier fir. The fir trees were a quick turn around, because they grew fast and then could be replanted to renew the plantation much quicker than the staple, the Scotch pine. 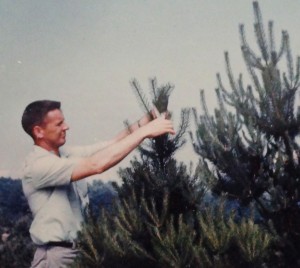 Christmas trees have to be sprayed for pest, just like fruit trees. One of the worst pests tree farmers battled was the white pine weevil. Trees had to be sprayed in the early Spring before the female laid her eggs.  If this was not done, the leader terminal shoot and other top whorls of the tree would be killed, and that would create a misshapen tree or less valued tree. The white pine weevil did not just prefer white pine, but it attacked other species as well such as scotch pine, spruce and Douglas fir.

The actual hands on work would begin in the summer. A crew of young teens wanting to earn money were gathered for trimming and the shaping of the trees. In the early years, we used pruning shears, but they eventually became obsolete with the advent of the machete.  Trimming was always done in summer months, so the tree trimming started early in the morning to beat the heat. Everyone met at the truck to find out where we were working and the shears or machetes which were freshly sharpened for another day’s work were doled out.  If you used a machete, then leg guards had to be affixed to your limbs. A first aid kit was a necessity, minor cuts and sometimes major injuries occurred accidentally. At least a couple times during the pruning season someone had an accident while holding the leader branch of the tree and hitting their fingers or hand. Sometimes trimmers would gash their leg where it wasn’t protected by the guard. It was work that was not to be taken lightly or carelessly.

Each morning, a crew leader  in charge would assign each trimmer to a row. There was competition to work fast enough to stay with the group so you could be part of the conversation or at least eavesdrop on it. I was always the youngest worker, so the tree trimming chatter was always fascinating to find out what the teenagers were conversing about.  Mid morning we would stop for a break. A huge cooler of iced water was the target for everyone as the morning slowly heated up. A Christmas tree plantations did NOT have bathrooms, outhouses, or any such facilities, so a person had to lose their dignity and take a hike into the tall trees and relieve themselves. Primitive times demanded a primitive course of action . 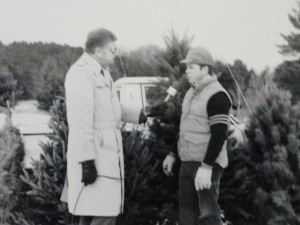 Lee Stone being interview by Orin Samuelson of "U.S. Farm Report" at the Danford tree farm

Initially most of the tree plantations were at Thornhill near Thompsonville. Former pasture land from the Ziesing era was furrowed and then planted mostly with Scotch pine. My brother  reminded me that the south side of  M-115 was a ghostly landscape of virgin white pine stumps from the lumbering days of the 19th century. The family had to remove the stumps before that tract of land could be reforested with seedlings. At the time I likely was not as impressed with this ancient graveyard as I am now, in retrospect. 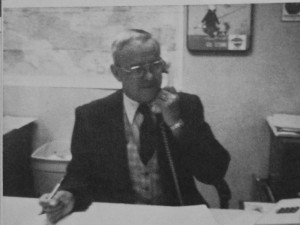 Stone and Sons used most of the land that they already owned to plant trees, but in the 60’s, they bought land east of Beulah specifically for growing  Douglas fir. That land was the highest point in the county and had an abandoned forest ranger fire tower at its peak, nestled in the woods’ edge. That piece of land eventually would become Champion Hill Golf course, once farming was not the family business focus. In the 80’s, about 400 acres  of  property were devoted to tree farming.  Michigan tree farmers like my family put Michigan into being one of the leading Christmas growing states in the nation, with  up to 4 million trees annually harvested and shipped throughout the U.S. and Canada, yes Canada, too. There were many grower who cut and shipped more trees than our family, but I would say that 10 to 20 thousand is a fair production for a side business. Gil Stone, a brother to Gene and Glenn Stone helped market the trees for his brothers through Blue Goose in Grand Rapids.

Orders were taken for trees during the summer and the  trees were  tagged  with  colored ribbons. The color of the ribbon denoted the size of the tree and sometimes the buyer. The tagged trees were then sprayed with a green color fast needle treatment, because it would often be two to three months from the time of cutting to delivery to the market for sale. Trees were shipped to cold climates as well as hot climates and the trees needed to be able to look fresh upon arrival. Beginning in October, trees would be cut and baled by a special conical device that in those days wrapped the tree in binder twine as it passed, butt end first, through the machine and left the tree tightly bound. Now a special plastic netting is used to bale trees. The baled trees were then stacked high on trailers and trucks and taken to the staging areas where they would be loaded onto semis prior to Thanksgiving.  As trees came in to be unloaded, the staging area  quickly grew to a  giant green wall up to 50 yds. long. When the trains were still running in northern Michigan, I remember trees being trucked to Thompsonville and loaded on railroad cars  to be shipped  throughout the country. But most often they went by large closed and open racked semis.

Occasionally I was able to participate in the loading out of  trees as a “counter”. I could do this after school for a few hours or on weekends to earn a little bit of money. I had a small handheld device that I would click as each tree went up a motorized elevated conveyor.  My counter job was important to keep track of the how many of each size tree was being loaded as per ordered by the buyer. The semi truckers were often colorful characters, one in particular, was a guy by the name of Spider. He sure stood out as famous in our childhood memories.  He had pictures hanging in his truck that would have made my mother blushed had she known. He had tattoos on his arms, which were rare to see, I think one even said “Spider”.  These truckers came from places other than northern Michigan and were most certain a  curiosity to little rural kids.

To experiment and perhaps save money, there was a period of time that Stone and Sons bought seed and planted their own seedlings.  The nursery was  our old garden area next to our house. This area was transformed with special trucked in sterile soil, to prevent a transfer of disease. Then the nursery was covered with  an elevated horizontal snow fence to shelter the tender seedlings as they grew through the  heat of the summer.

In the late 60’s my dad wanted to replant seedlings in rows that were within a mature block of Christmas trees. Our tractor and planter did not have room to go down between the rows. So someone had the bright idea of using a work horse from a local logger or farmer to pull a little plow through the row to open up the topsoil so workers could then plant seedlings by hand. I was thrilled with the news that we were going to have a horse on the farm. I grew up reading all the horse books and had always wanted one. So I remember coming home from school and running straight out to the Christmas trees to see the horse that would be spending a few nights in our barn. I guess everyone was pretty tickled at my enthusiasm. So the crew leader told me I could get on him and walk him back to the barn, which was about a quarter mile away. My heart was beating outside of my shirt, I was so thrilled. So, without a saddle, only a halter and reins, I was launched up on the horse and started walking him toward the barn. Everything was fine, until we got near the barn, then the horse decided that was not his destination and he started to go faster and keep on going out the north drive and on up the road. Meanwhile the crew coming in behind me wondered what happened when the reached the barn and no me and no horse. I feared I was going to fall off this giant animal and be trampled to death by its huge hooves as he loped along. I pulled on the reins to turned him around. But he would just turn in a circle and keep going. I pleaded with him to go back.  I started crying, thinking I was going to die. Suddenly I heard  a tractor and trailer  coming down the road after me. A couple of the crew members pulled up along side the ornery horse and somehow grabbed the reins and got him stopped to my relief and sobs. After that experience, I believe I no longer wished to have a horse. 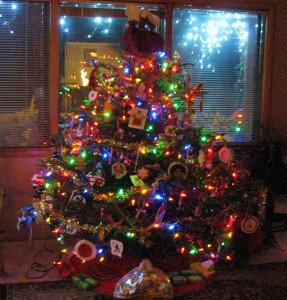 So that is my little walk down memory lane and all the work that goes into growing Christmas trees. Today is Thanksgiving Day and we didn’t make it back to Michigan for the holidays. Last Thanksgiving when we were there,  I insisted we take a Michigan fir tree back to Wisconsin for Christmas. My husband’s words to me were, “We DO have Christmas trees in Wisconsin, but wouldn’t you like a nice artificial tree, instead?”  I replied with, “It’s NOT the same!!”  He humored me, and we brought a MI tree home.   I fondly remember many years of  wading out in deep snow to cut a tree.  Our Christmas trees over the years were loved and adorned with  colorful and glistening decorations and lights. It became the focal point of  our home with gaily wrapped presents under its lower branches. The room with the tree became magical after all the room lights were dimmed and it was the only thing providing a glow. It is a tradition to have a real evergreen Christmas tree. This weekend, I eagerly anticipate  finding  and cutting a  Wisconsin tree,   ’tis the season!