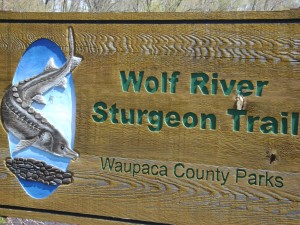 I believe my fascination with the sturgeon began while reading Kathleen Stocking’s book “Letters from the Leelanau: Essays of People and Place” written in the 90’s. She spoke of seeing historic photos of men standing next to piles of hundreds of dead Sturgeon, stacked like cord wood, a bygone era when sturgeon were  common all along Lake Michigan. The idea of this fish being an ancestor to fish that date back to 200 million years ago draws people to see them whenever the opportunity exists and  Spring spawning season is just that time.

The spawning time begins once the river temperature is in the mid 50 which can occur anywhere from late April to early May. The females participating in this activity are past their teen years and in their early twenties.  At this mature age they begin their first spawn and then only every four or five years after than, laying from 50,000 to 700,000 eggs. Fewer than one in 1,000 will survive to a hatchling which is about two weeks after being layed and fertilized. Then it has to survive being a food source for crayfish, red horse, mud puppies, carp, and adult sturgeon. If  it  makes it through its first year it should be around 9 inches long , then at six years of age it should be about  3 feet long , and 4 feet around age eight. Rate of growth slows from that point.

So I too decided to follow the migration of the mighty sturgeon up the Lake Winnebago Waterway System. I was somewhat amazed that I was not the only one wanting to see this spectacle. We found crowds everywhere we went where  there was good viewing opportunities like parks, river walks, and dams  north along the Wolf River from Appleton to Shawano. The rocky river edges provide good spawning sites for the females who lay their eggs on the rocks and the males that come by and fertilize their efforts. So spectators can get within a few feet of the ritual which make this event even more exciting. Young and old, laden with cameras, snacks, and chairs watch in awe.

At the end of our trip we found the Wisconsin DNR manning the Shawano Dam flowage to collect data from the fish in the river. They had many people spread across the river. As a giant  sturgeon was captured in a net, it was passed from person to person back to the shore to be measured and tagged.  I did not realize that Wisconsin is a world leader in sturgeon tagging for tracking their life and managing their population. I found the dam spillway drew the largest crowd to our surprise. It was nothing less than the circus coming to town.

I am not sure if this event will become an annual “must see” for me, but I am glad I had this chance to see nature at its best here in Wisconsin!

RSS feed for this post (comments) · TrackBack URI
Previous Post
« To Be TruGreen Or Not, That Is the Question
Next Post
A Barn of a Different Sort »
janeofwisconsin.com blog
Bombax Theme designed by itx
Content Protected Using Blog Protector By: PcDrome.