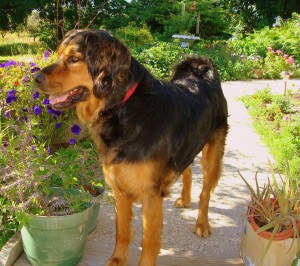 This past week has brought Jon and I  to a point of putting a value on our 4 footed furry friend, Eddy. He is only 6 years old, but is suffering from cruciate ligament degeneration. A cross-country skiing adventure this past winter exasperated the condition and resulted in partially torn cruciate ligaments in both knees. There is a solution we have found: TPLO surgery (tibial plateau leveling osteotomy) which can allow him to have a long life and full range of motion in his rear legs again.

Our considerations have been many. The down side is that the surgery is expensive and the recuperation process will be difficult. On the other hand, a reason for the surgery is it’s a proven fact that a dog reduces blood pressure for those around them.  Additional support, a dog demands exercise, which is multiple daily walkabouts in the neighborhood which is good for both the dog and the owners.

More importantly and personally is the history this dog has already created with ME, especially. I rescued him from a shelter after being bounced around many times from owner to owner in the first three years of his life. I was told at the shelter if a home was not found for him he would be put down, bigger dogs always go first in these shelters. At the time, I had struggled through a year of  my spouse being diagnosed with an aggressively terminal cancer, which took his life within that year. My children were out of the house and life was extremely lonely and depressing. My family doctor told me to get a dog, which I decided to look into. I clicked onto “Petfinder”  on-line and started watching the local shelters to see what they had in the way of  homeless canines. I had noted that the Benzie County Shelter had posted a picture and information about a dog coming to the shelter soon, because his elderly owners couldn’t provide a home for him anymore. That piqued my curiosity. So one day in February when we had no school due to a snow storm, I found out that Eddy was at the shelter. I hurried up there and immediately saw two young lab mixed dogs frolicking around in the snowy fenced in area outside of the shelter. There was also this big, long-legged brown and black dog who was playfully engaging the pups into a game of tag. To make a long story short, I found out that I could try out Eddy for a week or so and see if he could fit into my life style. He worked out well, I started walking him twice a day, he became my friend and companion, instantly. There have been some ups and downs since then, last year he began to  suffered from separation anxiety from being at home alone while I was at school.  Within the last two years , I met someone I wanted to spend the rest of my life with.  By retiring from teaching and moving to Wisconsin to marry my new found love both Eddy and I would complete our lives. Having a dog, bridged the move for me. During the day while my husband  works, Eddy and I walk throughout the neighborhood, work about the house and yard, and generally keep each other company.

Likely the last motivation for renewing his quality of life is for the unconditional love he provides for both Jon and I. He is so happy to see us come through the door, often having a toy in his mouth, suggesting: “Hey, are we going to go out for a walk? I am ready. I have my toy!”  This always gets him lots of pets, hugs, and eventually a walk.

Looking at the hours of therapy and meds he has saved me from, it is not too difficult to make the financially difficult decision to have surgery and restore his movement. He is an essential part of  our family, he watches over us, and makes life fun. Proving that he is, in my opinion, the best dog in the world, and worth saving.

For more information on the surgery go to the following link:   http://www.vetsurgerycentral.com/tplo.htm

Looking for a pet? Here is a great link:   http://www.petfinder.com/index.html

RSS feed for this post (comments) · TrackBack URI
Previous Post
« The Vernal Equinox Arrives in Appleton
Next Post
To Be TruGreen Or Not, That Is the Question »
janeofwisconsin.com blog
Bombax Theme designed by itx
Content Protected Using Blog Protector By: PcDrome.