WANTED: A LAWN BOY WHO CAN DO EVERYTHING

Since I was a little girl, my farming family has lived under the authority of weather. It was either a no frost Spring and a bumper crop that made it through the season unharmed or a bumper crop that was hit by a severe storm loaded with wind and hail just prior to harvest. Another scenario was the occasional heartbreaking, almost criminal, late frost that robbed farmers of a plentiful harvest and money in the bank. What a life. My family doesn’t farm any longer, but they still are affected by weather. Too much rain slows the golfing customers, high temperatures only fill the early morning and early evening tee books, and hot, dry weather pushes up the costs of electricity for pumping and sprinkling.

I,too, was born with that same love of watching things grow and getting my hands dirty.  My mom once told me that the love of farming almost caused my brother to be named Macintosh and me Cherry. Thank goodness someone came to their senses!

Keeping the yard and gardens up kindles that same joy found in farming. Jon and I have an understanding about our yard, he very diligently mows every 3 days, keeping the lawn on the high side, yet thick and lush. My jobs, not assigned, but clearly needed, are doing the trimming of the bushes, trimming the grass along the fence line and around the raised garden beds, dead heading the flowers, and cleaning out the hated gutters which fill up with leaves in the fall and maple seeds in the summer. His job takes a few hours every week, mine is intense but only 2-3 times during the year.

Yesterday was the first day I felt I could comfortable venture out and begin the first round of heavy duty yard work that had gotten out of hand due to the hot and humid temperatures and almost daily heavy downpour of rain. I had considered 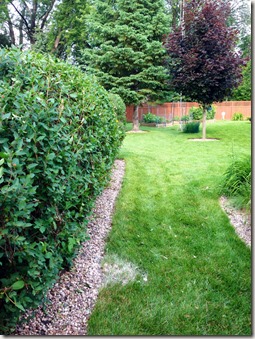 my various tasks and decided to pick trimming the bushes first.  We inherited these bushes from the previous owner and they create a border between our yard and my neighbor Pete’s driveway. Over the last five years I have  shaped this line of honeysuckle into a nice dense hedge. After a couple hours of squaring up things and whacking back unnoticed maple saplings that managed to grow taller than me,  I suddenly noticed weeds spouting in the gravel surrounding and between the bushes. Ugh! It was an extreme winter, and I generously fed the birds through out the season. The birds would fly back and forth from the feeders to these bushes. This activity produced hundreds of birdseed weeds under the bushes. So this task quickly became the worst, I started the elimination process on my neighbor Pete’s side. He was out and about mowing his grass, so working on his side presented an opportunity to chat a bit. He lost his wife this past winter and is still learning how to do without her company. I take over care packages of food occasionally as an excuse to visit. He seems to enjoy that, and today was no different. So my quick start to yard work ended up taking most of the afternoon, plus providing a near miss of kneeling in an giant ant hill that I later noticed as I raked up the debris from trimming and weed pulling. Later a canister of SEVEN was  used to frost the top of the hill. Sayonara ants! 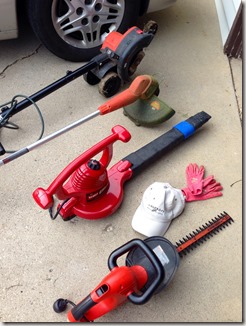 The topic of yard work can’t be left without addressing tools. I LOVE yard tools like my electric bush and grass trimmers! A new tool I had to add to my favorite list is an edger for sidewalks. I quickly discovered that people edge their sidewalk monthly during the summer to keep the grass from growing over the walk. There are a couple methods I have noticed. One neighbor on the next street over,  creates the Grand Canyon along the sides with a trencher which leaves much to be desired as far as “curb appeal”, but he only has to do this once. As for me and the majority of neighbors, we use an edger that leaves a discreet little space at the sidewalk’s edge and nicely squares up the lawn.

The clean up requires my next favorite tool, the leaf blower. One of my college roommates said it was her answer to a fast and efficient way  to move household clutter when time was short and company was coming. So no laborious sweeping, of the dirt kicked out by the edger,for me. I just set the leaf blower to high to whip that dirt to Smithereens! Unfortunately, Smithereens happens to be the gutter and the city say, that in no uncertain terms, should residents  put snow, leaves, or 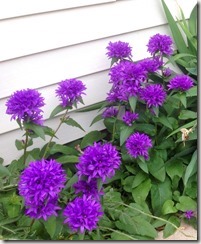 dirt into the gutter of the street, because it eventually will clog up the street drains. So the last step is taking the leaf blower to the street and blowing the dirt and maple seeds into a pile, then placing  it in a yard waste bag.

As for the gutters, I know it is time to clean them when I see maple trees making themselves at home high above the yard in a lovely border around the roof. But that will be another day, I will need my yard boy, Jon, to move the ladder for me.

The pros out weight the cons in managing our little yard: the weather rules…. which can be good and bad, I realize my aches and pains more readily from stooping and bending as I work , but I sleep better, have more peace of mind, and find great pleasure in the end results. AND let’s not forget, it WAS a long winter and it is great to be outside again! So no lawn boy needed here, except for the one who currently does the mowing.