We all have heard the many versions of stories about a basket being left on the doorstep, here is my version. Jon and I returned home from Green Bay after spending an evening eating at a favorite restaurant. As we got out the car and walked toward the house, we saw a large green square basket by the back door. I cracked a joke as we approach it: ” I hope it isn’t a baby!”. I laugh at my own joke and Jon coughs. We peer into the basket and find Christmas lights and a single strand of red hot pepper lights.  Scratching our heads about the basket and its contents, we took it inside the house as far as the kitchen. I dug through the basket looking for the note that SHOULD have explained why it was left at out back door, but none was to be found. So then we starting theorizing how it came. Maybe our recently widowed neighbor, who had been cleaning out his wife’s years of hoarding, thought we would like more lights. Maybe someone dropped them off at the wrong address and they were really meant for some other family.  Maybe the two sisters and Mom who live down the street and volunteer at their church Thrift Store thought we should have them for a summer party. 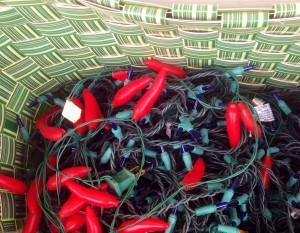 With no solution as to its sudden appearance, it sat in our kitchen for six weeks. I thought maybe we should call the neighbors and ask if the basket belonged to them. Or maybe set the basket out on the snowbank in front of the house and see if someone recognized it or would want it back. Finally being tired of walking around the basket in the kitchen, I put it in a closet near the backdoor, thinking it would be close by, when the REAL owner showed up demanding it back. Several weeks passed and each time I would go to get a garbage bag out of the closet my annoyance would return. 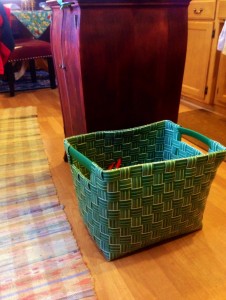 Any guesses on how this ends? Well recently one of my neighbors stopped over with a couple loaves of bread from the restaurant where her daughter works. I ask her to come in and have a seat because she is notorious for endless talking in the middle of the street between our houses or in the driveway. So we visit for forty five minutes. I then tell her, after going to two funerals of senior neighbors on our block this winter, I was getting to know some of the neighbors further down the street that I really hadn’t talked to very much. In the course of the conversations, during the two different funerals, we decided we should have a summer block party of some sort. When I mentioned the block party, my visiting neighbor blurted out ” Great, you can use the Christmas lights I left at your back door to decorate the yard!”  She then laughed and said she hadn’t decided how long she was going to let the prank go, before she told us it was she who had left the mysterious basket. I again shared the joke, “better Christmas lights, than a baby!