A Day of Amateur Radio and Fishing

Just as the sun was coming up, AB9NN, Jon, was off to an early morning  amateur radio community service effort for the “Race the Lake” .

This event is one of  many the local ham radio groups participate in as community service opportunities from May-September. This particular event benefits the Fox Cities, Winnebago County, and Fond Du Lac ARC groups (agencies that provide educational, advocacy, social, and recreational activities for people with disabilities). In other words, this biking event was for a great cause!

The Ham radio ARES-RACES organizations support their local communities through activities such as these and most importantly for emergency communication and coordination of Sky Warn severe storm spotting.

Knowing that this Sunday would be a bit different, Jon and I participated in our Saturday church service, leaving Sunday more like a Saturday.

I mentioned that the day started slowly for me, because going to bed late, then making sure Jon was up early, dug into my sleep time. So I slumbered until he returned from his early volunteer duty. 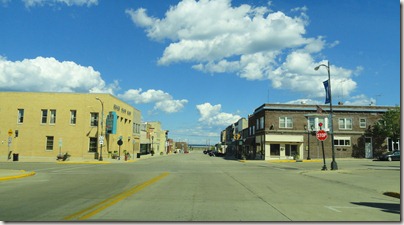 He wanted to get the lawn mowed and did, then he decided we needed another outing for the weekend. We loaded up fishing poles, that were collecting dust in the basement, donned fishing hats, and headed out for the East Coast of WI, and Kewaunee. Upon our arrival we 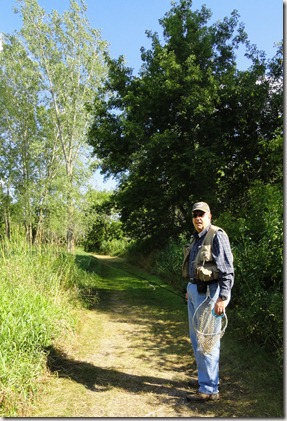 drove around town a little then headed up stream to a little park where we left our car behind and trekked up a two track to an opening to the river. 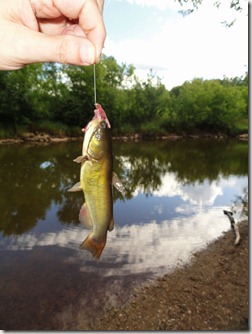 Jon had to remind me how to operate and place my fingers on my fancy reel, a spin caster. I loaded up a worm on my hook and flipped it out into the river on my first try. Immediately I felt a small tug. Jon advised me to keep my line taut and slowly reel it in. OH DRAT! A bullhead! I warned him from my previous experience to not let its tentacles touch him, they are stingers. He carefully extracted it from my line and flipped it back into the river.

I reloaded my hook. He told me to try and pop it between a couple of rocks 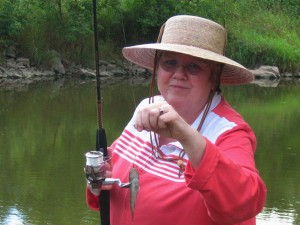 across the river. Confidently I flipped it there and more and snagged it on the opposite bank. OH GREAT! I whipped my pole back and forth horizontally and vertically and finally got it free and then slowly dragged in back in. But again, another small tug, and I pulled in a strange little guy that appeared to be a strange little fish called a Round Goby. The goby is an invasive specie brought in by foreign ballast water with good and bad points. The good merit is it dines on zebra mussels, but the flip side it also feeds on some of the cherished tiny stages of game fish. After struggling to identify it, it too, was tossed back into the river.

My last cast put my line in the tree over head after nearly missing my husband behind me. I suddenly remembered that my casting should be sideways not vertical. Oh well to late, we had to break the line and decided then it was time to go. 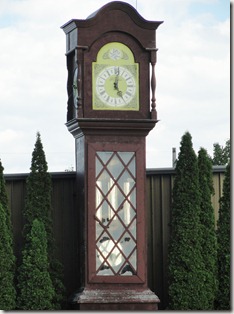 We then ventured back into Kewaunee to find the giant 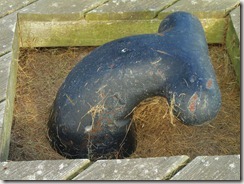 grandfather clock for a photo opp and the place where the car ferries once tied up in the harbor. Kewaunee had nicely recycled the car ferry pilings into bases for small decks that each held a picnic table. The one ancient tie-up for mooring the car ferries that remained, looked like the tail of a whale diving down into the grass. 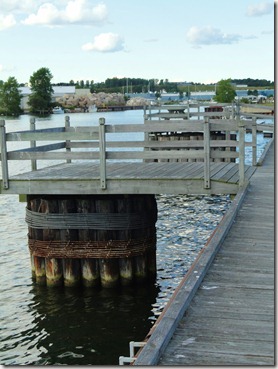 The car ferries began running out of Kewaunee in the late 1800’s with rail road cars filled with flour for Europe. Its history also reflects the visit of early French explorers like Nicolet, and missionaries such as Marquette. There were even rumors of gold being found up river, which was a bust. Land speculation followed the gold bust and then lumbering. Eventually the city became an important 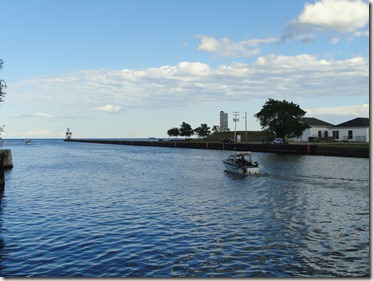 harbor and  port city. Ship building was vital to the economy in the mid twentieth century,to my surprise, as in Marinette, Manitowoc, and Milwaukee. The U.S.S. Pueblo was one famous ship that was built by Kewaunee steel workers as well as other WWII ships. 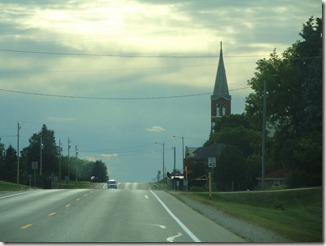 to and from Appleton took us through Wisconsin dairy farm country. We passed by many many fields of corn. The horizon was filled with new and old silos and barns as far as the eye could see, a fascinating sight. We passed through many tiny towns, that with a blink you would miss them.

On our return, Jon managed another, of many 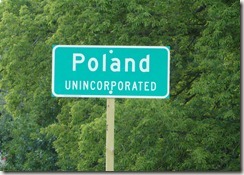 pictures, he has had taken over the years, next to the “POLAND” sign, to our amusement.

It was another great day in Wisconsin, even thought it did not put food on the Kreski table, as one of my friends from Michigan had hoped.

P.S. Jon wants to move to Kewaunee, the HF mobilinging we did while there had “full quieting”.