Not Your Typical Parade 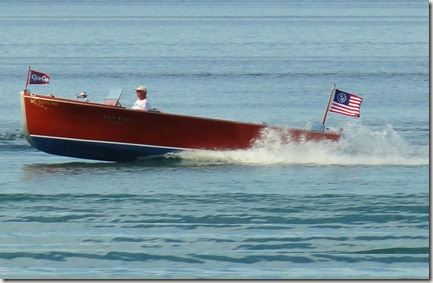 My friend Ginny exclaimed that I, as in me, have never arrived anywhere early and this morning was no exception. She wanted to see the Classic Wooden Boat Parade that would be taking off at 9 a.m. sharp from Beulah Beach. I promised her I would do my best to pick her up at her cottage by 8:40. Our plan was to see the boats before church. Well she WAS correct about my timing, Jon and I arrived at her driveway about 8:55 and headed to Beulah, which was only about 5 minutes away.

She chided me for my late arrival. I rebuked her with, people are never on time for events

like this. I was wrong. As we pulled up to the beach we saw in the distance the ten plus Criss Craft boats, in single file, heading west down the lake. I quickly suggested that we could drive around the lake and watch them so all weren’t disappointed. The perimeter of the lake is about 25 miles and we easily had 1 1/2 hrs. until we had to be anywhere. So off we went. My husband Jon had never driven all the way around the lake and early Sunday morning is about one of the best times with little traffic, a few joggers and dog walkers, and others doing what we were doing: watching the parade that returned Crystal Lake to a previous era.

The lake could not have been more beautiful or calm. The sky was a bright blue and we were on an adventure. Since we were watching the lake more than the cottages, I didn’t get to enjoy my  leisurely drive to admire charming old cottages, the remarkable new huge homes, and the beautiful landscaped gardens. We did remark that it was nice to see so much patriotism with small flags lining the lake lots and red, white, and blue banners hung from porches and window frames.

We had several viewing spots so we could stop and take pictures and wave. The boats were moving quickly so we couldn’t linger very long to admire them. One boat greeted us with several blasts from its horn.

The boats and our little car of adventurers, arrived simultaneously back at Beulah. We then ventured out on the T-dock to be closer to the water and the parade as they fell out of line. We snapped a few more pictures and were mesmerized by the view looking down the lake and the beauty of the high blue green hills surrounding it.  Reluctantly we left the lake side sanctuary and headed for church. I looked at the dashboard clock as we pulled into the parking lot: well what do you know! Miracles DO happen, we were 15 minutes early!  I would have never believed  so much could have been accomplished on Sunday morning: a beautiful drive AND arrive on time to our destination. Hallelujah!